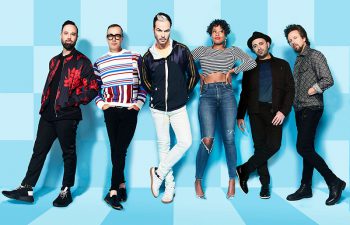 As of August 12, 2021 Edgefield Concerts are operating at full capacity. Per state guidelines, masks are strongly encouraged outdoors and required indoors until further notice.

At the time of live shows, we will follow city, state and county mandated COVID precautions, which could include mask wearing, proof of vaccination or other safety measures. Artists may also require additional restrictions for their individual shows. We will continue to keep our ticketholders updated on any requirements or restrictions that are in place at the time of each show. In the event that shows are postponed or canceled, our website will be updated.

Multi-platinum artists Fitz and the Tantrums have quickly grown from independent upstarts to bonafide hitmakers. The LA-based band recently released their much-anticipated, fourth full length album “ALL THE FEELS,” featuring singles “123456” and “I Just Wanna Shine.” “ALL THE FEELS” follows the band’s 2016 release “FITZ AND THE TANTRUMS,” which spawned the group’s biggest hit to date, “HandClap.” The RIAA-certified 2x Platinum single has logged more than 400 million global streams, went top 5 on both the Hot AC and Alternative Radio charts, and also enjoyed major airplay across the country at Top 40. The band has brought the infectious energy of their live shows to the small screen, with nationally televised performances of “HandClap” on ABC’s “Dancing With The Stars,” “Good Morning America,” and “Jimmy Kimmel Live!,” NBC’s “TODAY,” “Tonight Show Starring Jimmy Fallon,” “America’s Got Talent,” and Macy’s Thanksgiving Day Parade, and the syndicated “Ellen DeGeneres Show” among others.

Fitz and the Tantrums’ eponymous album followed their breakout major label debut, “MORE THAN JUST A DREAM,” which featured back-to-back Platinum-certified, #1 Alternative Radio singles in “The Walker” and “Out Of My League.” Both singles also enjoyed Top 15 success at Hot AC. The band has performed countless, sold out headlining shows and is always a standout at music festivals around the world, including Coachella, Bonnaroo, Lollapalooza, Austin City Limits, and more.