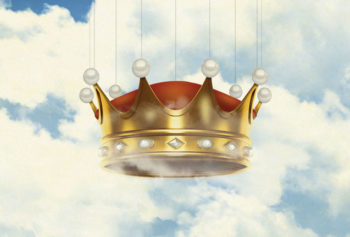 “It’s a story about gluttonous individuals sucking the colors out of the world,” says Primus singer/bassist Les Claypool. “The overuse of resources by the greedy elite, and how the meek masses can overcome them in the end by unifying. It seemed pretty relevant these days.”

The tale Claypool is describing comes from a 1978 children’s book called The Rainbow Goblins by the Italian author and artist Ui de Rico, and it forms the basis for the new Primus album coming out September 29, The Desaturating Seven. In the story—which is accompanied by stunning illustrations, done in oil paints on wood panels—seven goblins come to the valley where rainbows are born, intending to steal the rainbows and eat them. The valley, though, knows that the goblins are coming, and makes a plan to thwart the wicked creatures by hiding the rainbow. After the goblins are caught in their own nets, the flowers release the colors of the rainbow and drown the goblins, and in gratitude, the rainbow turns the flowers into beautiful birds who fly across the valley in freedom.

“My wife got turned onto it when she was a kid, and we started reading it to my children when they were very young,” says Claypool. “It became a bedtime story favorite. It always came across a bit frightening, like an old Grimm’s fairy tale—a little dark and creepy, which seemed very much up my strasse.”

Claypool found particular inspiration in de Rico’s paintings for The Rainbow Goblins. “The artwork is just amazing,” he says. “There’s a beauty but also a dark eeriness for this compelling, sinister story. The paintings are incredible, vibrant, very unique looking—it’s a good contrast between dark and light visually and also metaphorically. And there’s always been a strong visual element to Primus.”

Indeed, taking inspiration from a wide range of sources was part of what made Primus one of the most distinctive, innovative bands of the 1990s. The trio’s alt/punk/avant-­garde/psychedelic/country attack, along with Claypool’s surreal, fever-­dream lyrics, resulted in some of rock’s unlikeliest hits, including “Tommy the Cat,” “Jerry Was A Race Car Driver,” and “Wynona’s Big Brown Beaver.” The Desaturating Seven marks the return of the definitive Primus line-­up—Claypool, guitarist Larry “Ler” LaLonde, and drummer Tim “Herb” Alexander—for its first album of original music since 1995.

Starting as an underground phenomenon in San Francisco, the band’s cult grew rapidly. Such albums as Sailing the Seas of Cheese (1991), Pork Soda (1993), and Tales from the Punch Bowl (1995) all went gold and or platinum, and Primus toured with some of rock’s biggest names—U2, Jane’s Addiction, Public Enemy, Rush—and headlined the third Lollapalooza festival.

Alexander left and rejoined Primus several times, and Claypool alternated between the band and such other projects as Oysterhead (with Trey Anastasio and Stewart Copeland) and the Claypool Lennon Delirium, alongside Sean Lennon. In 2014, Alexander returned for the Primus & The Chocolate Factory with the Fungi Ensemble album, on which the group covered the iconic soundtrack to the 1971 film Willy Wonka & the Chocolate Factory.

Staying in the fantasyland of children’s stories, Claypool decided to tackle the adaptation of The Rainbow Goblins. “The challenge was to write music about goblins and rainbows and not come off overly clichéd,” he says. “I didn’t want to be overly literal either—there are very few straight-­up lines from the book in the lyrics, more like hints at metaphors.” He started off with the story’s climactic moment, which became the nearly-­eight-­minute epic “The Storm.”

“I wrote that and recorded some bass and vocals, and I played it over the phone for Larry,” says Claypool. “I worried that I was going too far down the 70’s art/prog path, I didn’t want it to come off cheesy. But he loved it, and then so did our manager, which inspired me to keep going.”

With that central piece down, Claypool started fleshing out the journey of the book, creating an introduction, “The Valley,” that established some of the themes that thread through much of the music. From there, it became a matter of working through the story and building a cohesive structure.

“Originally it was going to be one giant piece, but some parts didn’t match up,” says Claypool. “You get these epiphanies and then you hit a wall—I was rolling along and then ‘The Trek’ really hung me up. ‘The Dream’ was an odd one, tough to wrangle, but a good contrast—very dark and sparse, then there are these big percussive hits and then at the end, away it goes, into this early Peter Gabriel-­ish rhythm.”

Having to maintain a story line represented a new sort of challenge for Claypool’s writing. “When you have a narrative, it puts up parameters,” he says. “It gives you interesting jumping-­off points, but it can also make it more difficult. Those confines can propel you forward or hold you back a little bit. But using someone else’s art for inspiration certainly opens doors you wouldn’t on your own.”

Musically, The Desaturating Seven led Primus back to some of the sounds and styles of their earlier days. “This record hearkens back to our prog roots—Rush, Yes, Crimson, all those things,” says Claypool. “It’s a little heavier than the last record, more intricate than anything we’ve done in a while.”

Which, he adds, made these songs ideal as a return to working with Tim Alexander on original material. “This stuff is totally In his wheelhouse,” says

Claypool. “Intricate and melodic drumming is what Tim does, what naturally comes out of him.”

From its inception, Claypool approached The Desaturating Seven music with an eye toward presenting it on stage. “As I was laying it out, I was already thinking about how it could be performed trunk-­to-­tail,” he says. Now he’s in the process of planning a tour that will feature a complete performance of the new record—a show with a set of Primus material and then “an entire set of Goblin Rock, with full production and fancy eye candy.”

For Les Claypool, sailing the seas of The Rainbow Goblins represents the completion of an idea he’s been kicking around for a long time. “Twenty years ago, I thought it would be great to turn it into music someday, but I’m just getting around to it now,” he says. “It was kind of a back-­burner thing—but as I get older, I have to get through those, because at some point, I’m going to open up a hot dog stand and say goodbye.”

In the end, though, for all its specific requirements and obstacles, The Desaturating Seven came down to finding a way to let Primus be Primus. “Every time, it’s like building the Golden Gate Bridge out of a pile of popsicle sticks,” says Claypool. “You have a certain amount of sticks and you have to figure out how to make it work. But I’ve been working with these particular sticks for a long while, so I tend to know where to put them.”